Today the most important ratings, the customer ratings, stand as follows:

Droid Life - "fantastic example of how mobile games don’t need to be all about high frames per second and amazing graphics. "

Jay is Games - "QuestLord is great."

Indie Retro News - "What makes this game even more unique, is that the replay-ability is higher than what we usually expect with some Dungeon Crawlers"

Gaming Trend - "QuestLord – it’s charming, it was made with a certain presentation and gameplay style in mind, and it delivers."

Phandroid - "QuestLord manages to provide players with enough depth to keep ‘em hooked, while simultaneously keeping it casual enough for newcomers of the genre"

Pocket Gamer - "For the asking price it offers plenty of entertainment"

Hardcore Droid - "It’s a rare mobile game that can handle so many modes of play, but Quest Lord does them all with and 8-bit charm and style."

Touch Arcade - "Assuming you're looking to give dungeon crawlers a try, I'd definitely recommend QuestLord as an introductory taste."

Tuaw - "QuestLord doesn't elicit that feeling of being immediately overwhelmed that I seem to encounter with other dungeon crawlers."

Appys - "This is one of the best retro RPGs yet - and one of the few that really sticks to its guns."

Slide To Play - "Eric Kinkead has done a wonderful job of making a game that will appeal to hardened veterans and newbies alike.

Apple Headlines - "Rather than come off as boring or simple, however, QuestLord feels familiar, like the scent of an old book. Yes, it’s nice to see innovation, and yes, it’s always fun to see developers try something new, but once in a while, it’s great to see someone just stick with the old, and do it really well. That’s what QuestLord is — if you like these old 2D RPGs, you’ll feel right at home here."

Ultima Codex - "If you played and loved series such as Might and Magic, Akalabeth, or Wizardry, you’ll feel right at home in QuestLord."

The Gaurdian - "QuestLord will provide a warm glow of nostalgia. But it's a good game in its own right"

So, there it is. If you look back at the beginning of this blog you can see that I really had no idea what I wanted to do or make. But sometime early on I got it. It came to me. Probably playing a lot of Ultima 3, it dawned on me what I wanted to make. I wanted to make a mix between the dungeons in Ultima, with the textures of Eye of The Beholder/Lands of Lore, the outside vastness of Ultima IV with tons of characters to interact with and a quest system familiar to that of World of Warcraft.

I couldn't be more happy with the results and I would like to thank everyone along the way who helped me, encouraged me, and play tested for me. When things calm down a bit I will do a proper thank you list for sure.

It looks like I am now officially in business.  :) 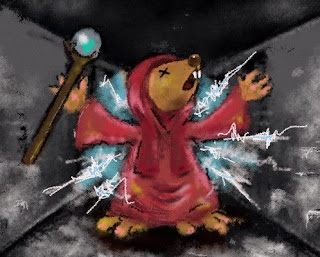 I got a lot of fan art from QuestLord. But I think the one person that really nailed it and was so fun to interact with was Minawa.  A Ratkin Wizard by minawa: A Yeti in a Dungeon: Amateria, Seller of Exalted Apples: Bar Maiden Amy: (They started to improve on a massive scale) Feneri the Enlightened: (The delight in seeing these come to life was immense!) Needless to say I connected with Minawa to give thanks for such inspirational pieces. I enjoyed the art so much that we even worked on a compilation. I drew a picture of woods, then I handed it off to him. Then he drew in 2 characters in those woods! Then I drew a dwarf witnessing the entire thing! (note:currently busy,  When time permits I will ad the compilation ) For more on Minawa's art
Read more